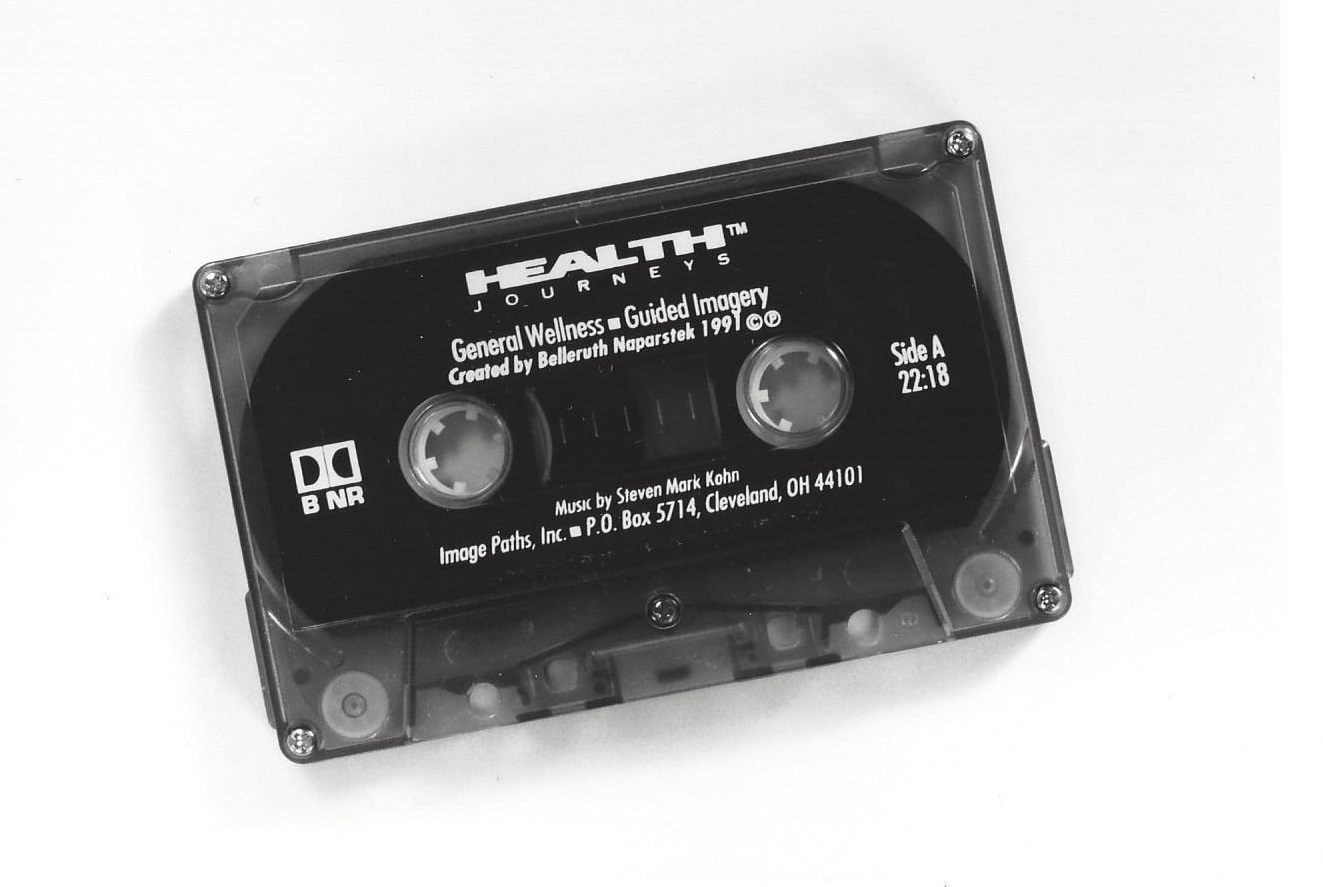 Has it really been 30 years since we got this mind-body audio adventure rolling?  I’ve been reminiscing about our very humble beginnings.  And making what eventually became the first Health Journeys cassette tape.

Sometime around 1986-7, a woman I’m going to call Bonnie booked an appointment with my psychotherapy practice. She was looking for help with fighting stage 4 breast cancer and gearing up for chemotherapy.

Her metastases had spread into her bones and lungs, and she’d been told by a well-meaning but misinformed friend that maybe she got sick because she’d been too passive and that she’d best get more proactive if she wanted to get better.

Now, don’t even get me started on these simplistic, pseudo-psychological, one-dimensional theories of how people get sick and how they get well, okay? Makes me crazy. And besides, the very idea that Bonnie was passive was just plain hilarious.

She was one of the most assertive, demanding, take-no-prisoners people I’d ever met. Bonnie got away with outrageous behavior because she was warm, generous, loyal, charismatic, funny, and a lot of high-energy fun.

She’d heard that I’d made an individualized guided imagery tape for her best friend, a client of mine who was using it to boost her progress in therapy. (I was in the middle of a recording spree, making individualized, hypnotic, guided imagery tapes, gratis, for any of my clients who wanted one. I’d been inspired by some courses I’d taken in Ericksonian hypnosis by three inspired lunatics – Charlie Citrenbaum, Bill Cohen, and Mark King - at Sheppard Pratt, and I wanted to see if this kind of recording could make a difference in shortening treatment time and boosting change. I made them at my kitchen table in the wee hours of the morning, before my kids had to get up for school, with the crude help of 2 boom boxes. After 38 cassettes had been test-driven by 38 people, I finally stopped, because I was certain the technique had merit.)

I patiently explained to Bonnie that I was not qualified to make a tape on cancer, that it could be harmful to her, for all I knew.

Ms. Passive perked up and replied, “So, fine, call my oncologist. She’ll just tell you to go ahead. She thinks I’m gonna die in 4-6 months anyway.”

I countered that I still didn’t know how to make a cancer tape; that my skill, if I had one, was in making highly personalized, deep-dish guided imagery for my psychotherapy patients, whom I already knew really well.

Bonnie came back with, “Don’t worry. I’ll tell you what to do.”

So, I checked with her oncologist, and, as predicted, the doc assured me I couldn’t make things any worse, and no one on the tumor board was exactly taking bets on Bonnie’s longevity anyway. Her bottom line was, “If she wants a tape, give her a tape.”

So, I stopped worrying and let Bonnie tell me what to do. The tape ended up being about 15 minutes long. It had Bonnie’s white blood cells swarming around her lesions and shrinking them.  There were also Bonnie’s memories as a little girl, walking on wet sand at the beach with her much-adored father, her little hand in his big warm one, hearing the music of surf and seagulls, feeling cool sand squishing between her toes, the waves lapping at her ankles, and feeling very, very happy to have her dad all to herself.

Bonnie also had her mother (no slouch in the aggression department either), a ferocious cleaner of things, wielding a noisy vacuum cleaner that was sucking up any cancer cells unlucky enough to cross her path.

Bonnie loved her tape. (Why wouldn’t she? Everything on it was her idea :) )  She carried her portable tape player everywhere, religiously plugging it in while sitting in the waiting room at the Ireland Cancer Center, and during each and every chemotherapy session.

It wasn’t long before she was telling other patients and staff nurses to listen to her tape. She even created several bootlegs, and started handing them out to patients, with instructions to do themselves a favor and listen. For better or worse, I had a rogue point person and PR agent in the hallowed halls of University Hospitals of Cleveland.

Bonnie proceeded to do astonishingly well for a long time. Her attitude was upbeat. She was enjoying her life, shopping and lunching with pals, bossing everyone around, just as she’d always done, and she seemed to sail through her rigorous chemotherapy with little or no discomfort (except for when she lost her hair, which briefly threw her for a loop).

And some of her tumors were shrinking, while others were being held at bay, far beyond her oncologist’s expectations. She also seemed to be pain-free, in spite of what was going on in her bones, which surprised everyone.

As a result of Bonnie’s extravagant ad hoc promo skills, a nurse on the infusion unit asked me to make a general tape for anxious people in the waiting room, where they had to wait for their bloodwork to come back before they could “qualify” for the upcoming chemo they were dreading to have, but were even more scared of not having. Not exactly a stress-free zone, you could say.

I interviewed oncologists, nurses, patients, families. And I studied some amazing, inspiring, microscopic photographs of the action of the body’s immune cells as they sniffed out and went after cancer cells.

And because an important goal was to alleviate anxiety and have the listener get the benefits of seeing the chemotherapy treatment as an ally and friend to team up with, I wound up creating imagery of a beautiful, beneficent fountain of sparkling, healing fluid, that magically infused the body and encouraged the body’s natural defenses to shrink and desiccate tumors.

Other imagery had symptoms subsiding and energy returning. To help combat feelings of helplessness, isolation and fear, I surrounded the listener with a cheering squad of committed, fill-in-the-blank allies; and I also threw in an imagined future of a healed self doing what mattered most, happily engaged in what gave meaning and purpose to living.

The hospital used that first tape for years, and it became the basis for our very first Health Journeys guided imagery audio for chemotherapy, that still exists today.

Bonnie stayed alive and full of sass ‘n vinegar, with astonishing quality of life, for two and a half years. I’m not saying it was because of the guided imagery – she was a remarkable character, and I have no idea what combo of magical ingredients contributed to her lasting 5 times longer than predicted. But I do think that the imagery she created played a part.

Her downturn coincided with some traumatic family events, after which she quickly slipped into a coma from a rapidly growing metastasis to her brain. It was if her magnificent spirit took a look around at her new, tragic circumstances and said, “Pal, we’re getting outta here”.

I smile to this day when I think about her. I owe her a lot.  Respect, Bonnie!