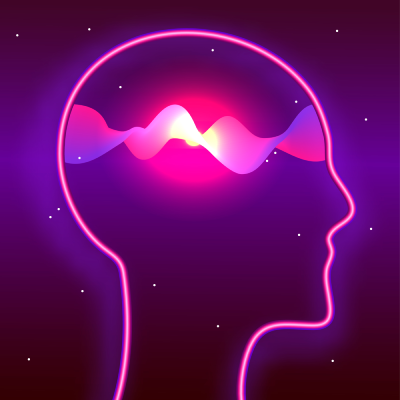 Personal disclosure alert: I am not a naturally “Zen” person (many people do not believe me when I say this). My brain is constantly juggling everything on my to-list – observing, planning and making meaning of the nearly infinite amount of information we are all taking in both consciously and unconsciously, each day.

Rather than a “calm, blue sea of tranquility,” my mind can often resemble more of the proverbial “monkey mind,” as its natural state is to observe, analyze, mull over, reimagine, and so forth. Which can make it a lot more challenging to tune out mental chatter and get a good night’s sleep.

Although imagery and hypnosis have been my mainstays to help me wind down and chill out, several years ago, I added something called, “binaural beat technology,” or BBT, to my mind-body toolbox. More recently, I’ve been creating guided hypnotic imagery programs that include binaural beats. I really enjoy them, and I hope you will, too.

What Are Binaural Beats?

Binaural beats are a type of audio technology, or brainwave entrainment, that can help your brain more easily and rapidly shift into a desired mode of being depending on the type of BBT used.

For example, you’ll notice that your brain works and “feels” different when you’re daydreaming (in a moderately slow, predominantly alpha-brainwave state), versus concentrating on a math problem or paying rapt attention to something (a somewhat faster, mid-beta brainwave state). When you are meditating, your brain shifts from a predominant beta (alert) brainwave state, to an alpha (more relaxed, or daydreamy state). And if you find yourself very deep in your meditation or falling into a light sleep, you have probably moved into a more theta-wave predominant state.

How Does BBT Work?

Binaural Beats are created by playing two separate audible tones, one in each ear. These tones are measured in hertz (Hz), or cycles per second. The tones played in each ear are similar, but not the same, and your brain won’t detect the individual frequencies - our brains actually “hear” what is perceived as a different, or “third” tone altogether.

As you listen to binaural beats, your brain “follows along” with the frequency of the perceived tone to shift into the mode associated with it. In essence, BBT helps your brain shift into a more desirable predominant brainwave state – that is, although your brain has a variety of different brainwaves happening at any given time, this technology can help you shift enough of them into the state that is most appropriate for the task at hand – whether that’s studying, meditating, or sleeping, etc.

Most often, binaural beats are combined with music, nature sounds, guided imagery, or some combination of these. In order to get the binaural beat effect, you’ll want to wear headphones (or listen through 2 speakers, one on either side of you) as you listen to audio programs containing them. Conversely, if you feel BBT isn’t for you, but you otherwise like an imagery recording, you can simply listen without headphones.

What’s the “Best” BBT? It Depends

Again, binaural beats are useful for helping shift into a predominant brainwave state that is appropriate for a specific purpose or will help with a specific task.

For example, delta ranges from 0–4 Hz and is associated with deep, dreamless sleep.

Theta ranges from 4–8 Hz and is the brainwave state associated with light sleep and R.E.M. sleep, as well as dreaming, the hypnogogic state and the most potent forms of guided imagery. In addition, listening to theta brainwaves has been linked to facilitating deeper states of meditation in those who are new to meditation, and has also been found to reduce feelings of stress and anxiety.

Alpha brainwave states (8-12 Hz) are associated with being relaxed but awake, as well as with light daydreaming. Alpha waves have also been shown to help ease pain and also have been linked to greater creativity.

Beta wave binaural beats (~12-30 Hz) are faster than delta, theta, and alpha beats. BBT in the mid-beta range can help you feel more focused when you are distracted.

There has been less research to date on gamma BBT. Gamma represents the fastest brainwaves (~30-100 Hz). Gamma brainwave entrainment has been linked to enhanced states of intuition and creativity (divergent thinking), relaxed but intense focus, and feelings of transcendence, love, and peace.

A note with regard to using BBT for pain: in some research, this has been helpful for reducing pain severity and increasing relaxation – including with patients suffering from headaches. That said, some may find that listening to BBT worsens headache pain. So, although BBT is worth considering for pain management, some people will find they still prefer imagery or music without BBT.

There is No “Best” Predominant Brain Wave State to Be In

At different times you will understandably want to be able to shift into a predominant brainwave state that is appropriate to the task at hand, whether sleeping, working on a project, meditating, or relaxing.

Finally, BBT is generally considered safe, but of course, if you have a health condition affecting your brain, speak with your doctor before trying binaural beats out.