"We are tickled pink to announce our new partnership with Hay House, which will be taking over direct-to-consumer sales with its robust worldwide reach. Please give us a week or two to adapt our product and consumer pages. Health Journeys will continue building customized apps and streaming pages for hospitals, universities, health plans, Military/Veteran organizations, and corporate wellness departments. Website service to our institutional clients continues uninterrupted. Stay tuned for more information soon. And Happy New Year!"

How Does She Best Use Guided Imagery at Her Women’s Shelter? 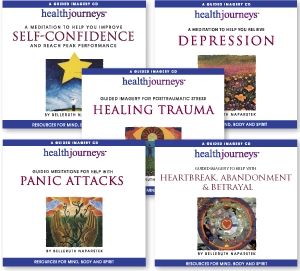 I volunteer at a battered women's shelter. I have been doing this work for nearly 4 years, ever since my daughter escaped a violent marriage and found refuge here.

Last month, a board member donated 3 of your Domestic Violence Recovery Packs to the house. What would you suggest is the most effective way to use them with the women here?

First, what great volunteer work you do! (When I first moved to Cleveland, and before I built up my practice, that's what I did, too, and I loved every meaningful minute of it. It taught me a lot.)

And how terrific that one of your board members thought to donate this particular set of guided imagery programs to the shelter. I couldn't be more delighted!

My first choice would be to institute a regular, ongoing, drop-in meditation group, maybe daily, maybe bi-weekly, at the same time and in the same room, which the members could attend as much as they wished.

And then I'd have each individual audio available in a kind of rotating lending library, so the residents could listen further in private if they wished. (But I'd have people sign them out, because it's amazing how fast your library can disappear! Happens all the time!)

It's often most impactful to introduce guided imagery in a group – people are more likely to listen to it as a group, and the contagion of the altered state in a group makes it more powerful than listening to it alone.

The group would need to be open-ended because of the nature of shelters and all the comings and goings of the residents. But having a consistent time and place makes it a stable part of your program structure.

It was hard being limited to only five titles when we put together this pack. There are so many programs that the residents could use! If it were feasible, I'd have also thrown in our guided imagery for Stress, Anger & Forgiveness and Healthful Sleep!

But be that as it may, back to my answer:

I'd introduce one title for each session, first playing the guided imagery and next the affirmations. You might first offer a brief introduction, explaining that this is a user-friendly kind of guided meditation, designed to promote relaxation, healing and growth, and that the cumulative impact gets stronger and stronger with repeated listening. I'd also ask for reactions and thoughts from the group after playing each track.

Some other good things to know: people tend to be much more relaxed and open after listening to guided imagery, so they're more likely to share with each other in meaningful ways. Guided imagery is kind of the ultimate ice-breaker.

And because survivors of domestic violence usually have complex posttraumatic stress, they're usually familiar with being in a dissociated or trance state – it's a natural response to being subjected to violence. This makes most of them the perfect guided imagery user, because they go deeply into an altered state during the meditation and reap maximum benefit.

Some, however, might be so hypervigilant, as a result of their traumatic experiences, that they might get more anxious at being drawn into a relaxing audio. Nobody should feel like they have to stay, if they're uncomfortable. Of course. But it might be good to announce this before you begin. (Others may want to stay, but sitting by the door; or standing; or keeping their eyes open.)

I hope this helps! Best of luck with this. And thank you for the work you do.