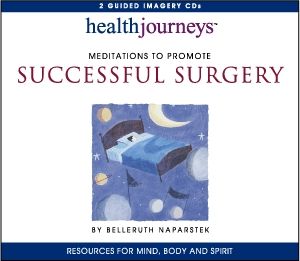 As Cindy wrote when she forwarded this thank you note to all of us last week, "These stories never cease to amaze me". But rest assured, we may get a lot of them but we never get tired of seeing them.

Just to throw in a relevant factoid, an interesting if counterintuitive finding from two separate studies done years ago – one from Blue Shield of California and one from a cardiac surgery pilot study Mehmet Oz and his team did (before he became a TV rock star) at Columbia Presbyterian – was that the more anxious and distressed the pre-surgery patient was, the more dramatically the guided imagery benefited them.

We also have plenty of hard data about significant differences in blood loss, recovery time, use of pain meds and more. But these personal stories tell the tale and bring home the point best!

We thank Barbara for writing and wish her the very best. Here's the note:

"I was scheduled for my TENTH trip to the OR (5th major abdominal surgery) in less than 14 month's time. I had changed surgeons and had endured months of sincere misery with an open fistula wound on my belly draining directly from my small bowel, and a colostomy in my large bowel that was both herniated and prolapsed.

"The Successful Surgery audio program arrived a mere 2 days before the surgery, but I played it as often as I could. Everyone was warning me that this was going to be a long, tough surgery (the colon cancer had spread to my liver and I was already noted to have 'massive adhesions' from the previous surgeries). When I came to the web site to purchase the CDs, the one phrase I saw so often in the reviews was "It went far easier than anyone expected." THAT was what I needed.  "May I now add my own? The very FIRST thing my surgeon said to me was exactly that. "It went FAR easier than anyone expected." His med student told me later that EVERYone in the OR had been saying the same thing.

"It was a six hour surgery with two surgeons, and it was a spectacular success. It's been a mere 3 weeks since the surgery and my recovery has also gone surprisingly well with no complications.

"So THANK YOU. You are utterly BRILLIANT at what you do, Steve Kohn's music is just magnificent and yes indeed, you contributed to yet another SUCCESSFUL SURGERY!