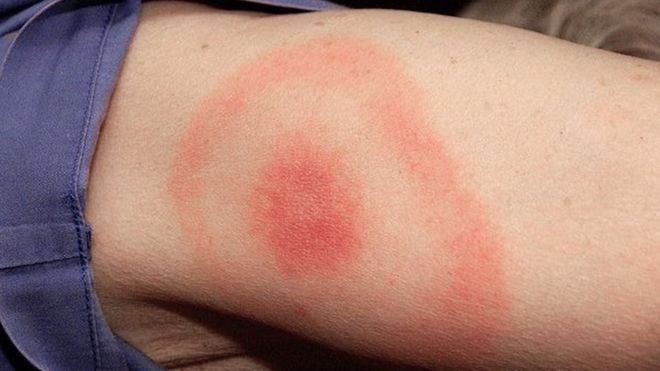 Growing up in rural central Pennsylvania, I spent a lot of my childhood playing with my siblings and dog in the woods outside of our home. Since there is no shortage of deer and other wildlife in the area, my parents knew the precautions to take to prevent the transmission of tick-borne illnesses.

They also knew the warning signs of these illnesses, flu-like symptoms like headaches, sore throat, swollen lymph nodes, fever, joint pain, fatigue, and, of course, that dreaded bulls-eye rash. (The rash, erythema migrans, is considered an early hallmark of Lyme disease, but not everyone with Lyme develops it.)

So when I came home from Girl Scout Camp in June of 2000, with a bite in the center of my back that developed a heart-shaped rash around it that kept growing bigger and bigger, they were on high alert. By the 4th of July that year, I had a low-grade fever and was complaining of daily headaches, so my mom decided to take me to the doctor to get tested for Lyme Disease.

Our immune system takes a few weeks to develop antibodies against the Lyme bacteria, so ELISA (enzyme-linked immunosorbent assay) blood tests that are done early on can be negative even if you are infected, which is exactly what happened in my case. Nowadays, especially in Lyme endemic areas like PA, the symptoms I experienced + the rash may be enough to get a doctor to prescribe some antibiotics, but that was not the case 19 years ago.

I was sent home with instructions to take some ibuprofen for the pain but was not getting any better, and when my mother heard about the limitations to the ELISA test weeks later, she called the doctor to try to get the bloodwork re-done. He said something like “you could test and re-test over and over for any disease, you’re not going to get a different answer”, and wouldn’t do another test. So we waited a while longer, with me feeling more and more fatigued by the day until one October morning I woke up to go to school and was surprised to find that my knee was so inflamed that I couldn’t walk.

Thus, a doctor’s appointment was made, with a different physician this time, and my mother went in with guns blazing, demanding another test – of course, it would come back positive for Lyme. I got a three-week course of antibiotics, recovered, and luckily for me, that was the end of it.

Lyme Disease can cause serious neurological and cardiac problems and takes a huge physical and mental toll when it goes untreated. Getting a course of antibiotics early on is a critically important game changer.

If you or somebody you know was not so lucky as to have my smart, feisty mother advocating on your behalf, and you are one of the increasing number of people who have acquired Lyme Disease, then consider listening to the spot-on guided imagery for Lyme by Glenda Cedarleaf that we are releasing on Tuesday. It addresses the symptoms and fallout of Lyme Disease and helps reduce the conditions that interfere with getting your strength, energy, and sense of well-being back.

Glenda is a gifted author, clinical social worker, and guided imagery specialist who worked closely with Dr. Karen Vrchota, to create the two tracks, Affirmations for Living Well with Lyme Disease and The Road to Healing. Regular listening will inspire, motivate, remediate and soothe mind, body, and spirit.