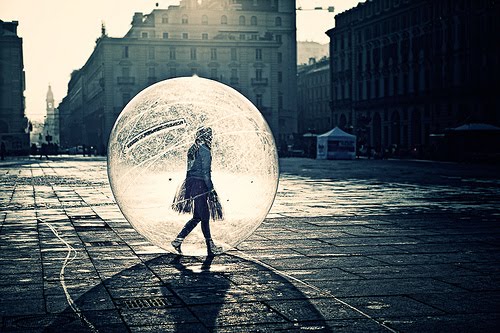 I was in the underground garage, walking up the ramp leading to the door of my building when a middle-aged man and woman opened the door to come out.

I backed down the ramp to give them ample room to pass me (read: 6 feet or better). The man stayed by the door while the woman continued to move towards me. I gestured her to allow me a wider berth, which she did with a nice smile.

The man continued to stand by the door - probably a mannerly habit of letting the lady in before going out himself, a kindness I usually appreciate. But it would have put me a foot from his face. I stood back, waving him on and waiting for him to exit. He didn’t.

Finally, he said, with some impatience, “C’mon in, I’m holding the door for you!”. I realized he didn’t know why I’d stayed put.

I just blurted out the truth and said, “I’m trying to keep away from you!” immediately feeling discomfort at the rude, rejecting sound of my words.

He got the idea, let go of the door, and came down the ramp while I waited off-sides. I offered “No offense intended!” on my way into the building, and just barely heard his half-ironic, half-serious, “I am offended!”.

I’ve been pondering these encounters. They’re disturbing because the social norms and cues we count on to guide our behavior have been turned upside down. A simple act of good manners becomes a threat to health and safety. It’s uncomfortable.

I’ve watched some pretty assertive people say nothing, even when I knew they were quite alarmed when people got too close to them. Some friends have told me they’d rather make something up rather than say something that just felt antisocial and mean.

We are driven by deeply encoded norms for our social behavior, absorbed through cumulative observation + remonstration, from toddlerhood on. This is how we become good citizens and join the human enterprise. This is how we keep the wheels of everyday life greased and productive. These little interactive moments are simply a different level of survival behavior, more at the meta-level, for society as a whole.

No wonder they’re so hard to dismiss! The 6 feet rule is individual survival behavior. Holding the door is a different kind of survival behavior, at the meta-level, for the culture to survive.

We’d actually be well advised to understand how difficult it is to pull a total switcheroo on our interpretation of a cue (holding the door), and how we behave in response to it.

Take care. Be rude if you must. Or politely make up a story - just protect the 6-foot air-moat of social distance around you. You don’t want to lose your life to an automatic reaction of agreeableness.

PS. We'd like to hear from you - how are you handling this "new normal"? When you run into somebody who's too close, what do you say?