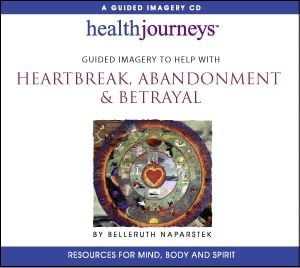 We got this thought-provoking question from somebody who'd been browsing our catalog, and objected to the way we had put our guided imagery for heartbreak, abandonment and betrayal under the category for posttraumatic stress...

Hello -- love your work! Thank you.

One small quibble. I see that in the catalog your "heartbreak" material is listed under "PTSD".

I worked the recovery effort at the World Trade Center (well -- I made coffee for the guys who worked in hell and hugged them when they left hell to come to me on hell's fringes) and know a lot of people who have truly seen the worst of the worst. Some of them - unsurprisingly - have PTSD.

It can be tough to get them to deal with it in some cases, and they can be rightfully touchy. One of "my" guys - who truly went through hell thousands of times: he's the bravest man I know - called me in a fury recently.

He'd read an article about a woman claiming she had PTSD because someone pinched her. He felt (and I agreed) that that cheapened his experience (and it can be very hard for PTSD sufferers to be taken seriously, as you know).

I'd move the "Heartbreak" material out of the PTSD section for the same reason. Heartbreak is awful -- I've been there. But PTSD is different and worse.

Please consider reorganizing that listing. "My" boys would appreciate it.

Thanks for writing and for doing the work that you do. I completely relate to what you're saying, and agree that posttraumatic stress is not the same as heartbreak.

In fact, I think that words like 'trauma', 'PTSD' and posttraumatic stress get over-used, wrongly used, and tossed around pretty cavalierly by some people who haven't a clue what it's really about.

I don't blame your guy for being furious. On the other hand, the woman who got pinched may have been a rape survivor who got sneaked up on from behind in a similar way earlier, in which case a mere pinch could set off a whole reaction – a true-blue biochemical cascade of alarm hormones – that would be traumatic stress all over again. .. maybe a stretch, but possible.

Still, I don't come to the same conclusion as you do about where the Heartbreak imagery belongs. True, more often than not, the loss of a romantic relationship doesn't add up to posttraumatic stress. It can be sad, upsetting, disappointing, scary, depressing, lonely, infuriating, embarrassing, devastating and demeaning, but even all that doesn't add up to posttraumatic stress.... just misery.

Posttraumatic stress, as I'm sure you know, has a very specific definition that relates to the three clusters of symptoms that come with it:

You can have PTS - with all three clusters - from a near-miss auto accident, a hurricane, domestic violence, a sudden grievous loss, an ICU stay, combat, captivity or being a first responder, journalist or recovery worker at a horror site like Ground Zero. Even though what generates the symptoms might be vastly different events, the symptoms of PTS are more or less the same, give or take, and what defines whether or not you have it.

I think that very often - almost always, I would say - a component of PTS is a broken heart. Sometimes that's in the very concrete sense of a soldier downrange being told his wife has left him or his best friend has just been killed (sometimes before his eyes); sometimes it's other kinds of wrenching, disturbing losses: the loss of a child, the death of an idealized notion of the abuser who was your parent or your spouse, the loss of your legs in an accident. Sometimes the heartbreak is for your own lost innocence and ability to take a certain sense of safety or human decency for granted.

Always with PTS there's a sense of being separated from the rest of the so-called 'normal' world by the extreme pain, anguish, terror, violence or horror you've experienced - that's a kind of heartbreak too.

The imagery on the Heartbreak audio does address this and helps the listener source their own strength in a different way than the imagery on the PTS program, and for that reason, it's a good complement to it.

So for that reason, I do think it belongs under PTS, but agree with you that it shouldn't be there exclusively. It should also be under Grief and Relationships, too.

I hope that makes sense

Thanks for writing and thank you for the work that you do. I know you've no doubt heard some horrific stories that have stuck in your head in disturbing, unwelcome ways. I know that's true for me. It comes with the territory, and for sure it can break your heart, many times over. So hats off to you. Allow me to salute your broken heart, too.