Okay, so when we last left you on the Inspiring Story page, we'd featured Michael Peterson's sleepless night in Iraq, after an especially dicey day and night, where his musical performance was scored to sound of whizzing and exploding shells. 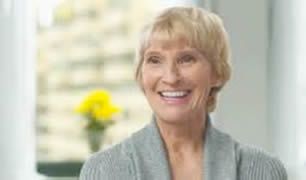 So now let's see how Colonel (R) Jill Chambers, the amazing, power-packed ball of energy who set this whole trip up, so that these isolated Soldiers in the middle of nowhere could get a little love, music, humor and inspiration from home... well, she was right there by Michael's side, talking to the troops, directing set-up and logistics, making everything run smooth as silk, all the while cheer-leading to beat the band...

Let me also say that this is the same Jill who was handpicked by Joint Chiefs of Staff Chair, Admiral Mike Mullen, to be his first Special Assistant for Returning Warrior Issues – not exactly chopped liver, you could say. Jill is further qualified to chat with the troops by having overcome her own posttraumatic stress, derived from having been in the Pentagon during 9/11. Jill now spends her days helping veterans and training returning warriors.

Okay, enough back story! Here's Jill's independently written take on that Iraq adventure she shared with her husband, Michael:

So there I was....the summer of 2011 in Iraq, traveling with country star Michael Peterson for 18 days, all over the country, as he brought a little of home to our amazing service members.

His last show took place at the Ministry of Defense (MOD), not far from downtown Baghdad. Over the last 2 weeks we had been shot at, chased, and even had the roof blown off the building he was playing in – we'd been through a lot. Sleep didn't come easy at all during this whole time, but we were going home soon, so I figured I could just gut out these last couple of days in Iraq.

Hours prior to his last show, an IED had exploded just outside the gate to Camp Victory, where all guests stay when they come to Iraq. Going out of that gate was our initial planned route to head to the show. Several soldiers were killed that morning and the stress was overwhelming...for everyone.

We ended up taking an Apache helicopter to get to the Soldiers at the MOD. They were thrilled to have Michael there (apparently they had not had anyone from the States ever visit them and bring some entertainment during their entire deployment, which had been almost a year.

Prior to the show, we ate dinner on the roof – strange to say the least. We had sharpshooters in all four corners of the roof and we had to eat with our heads down. Good grief, I was stressed to the max!

Once the show was over, we were told we could not leave. No one could drive to come and pick us up – it was way too dangerous on the streets of Baghdad, and the weather made it impossible for helicopters to be flying.

We were there for the night.

Michael and I ended up staying on the second floor of a makeshift, 2 story building, each of us in a room the size of a tiny closet. And all 40 Soldiers were in each of their tiny closets too! By 1:00 am I was so stressed from hearing explosions for the last 2 hours, I could not for the life of me even close my eyes.

Then I remembered - I had loaded Belleruth's Guided Imagery for Healthful Sleep on my iPhone. I had been using Guided Imagery to help me sleep for over 2 years and thought "Wow, what a time to use it now, here in an actual war zone."

It worked – and it worked perfectly. I was able to slide out of stress mode, and my attention shifted from explosions to restful sleep. I was out for the next 5 hours and fully functional the next day with much less stress and fatigue.

So after 30 years of Army service and all the crazy jobs, moves, exhaustion, and stress – oh, how I wish I could have had Guided Imagery then. The journey would have been so much smoother!

I am happy to tell any Service member and their families – this is a must for their toolkit !!