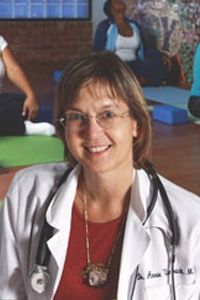 Given our current difficulties with addiction to prescription medication, we thought this story was very timely.

We got this note from a crackerjack internist at Johns Hopkins who often champions guided imagery as an intervention of choice for her patients Annie Umbricht MD had a patient with his heart set on a Xanax refill for his panic attacks.  Her response was pretty ingenious. She writes:

"Not all my patients follow my suggestions and listen to the guided imagery I recommend, although those who do derive plenty of benefit.

One patient who wanted a "refill" on some Xanax that had been started by another provider was not at all happy when I recommended your guided imagery for Panic Attacks, telling him he didn't need Xanax and it and that, in fact, it would probably make matters worse for him.

Since I was getting nowhere, I decided to give him both the guided imagery and the prescription, warning him that the scrip was a one time only option.

When he came back a few weeks later, he handed back the unfilled prescription to me. When I saw him several months later, he was rid of his panic attacks altogether, and was using the mind-body methods he’d learned to deal with some chronic pain issues and itching.

This stellar outcome doesn’t always happen, but when it does, it makes all the failed attempts to get a patient to adopt healthy behaviors fade to the background, and it’s a very, very good day!"