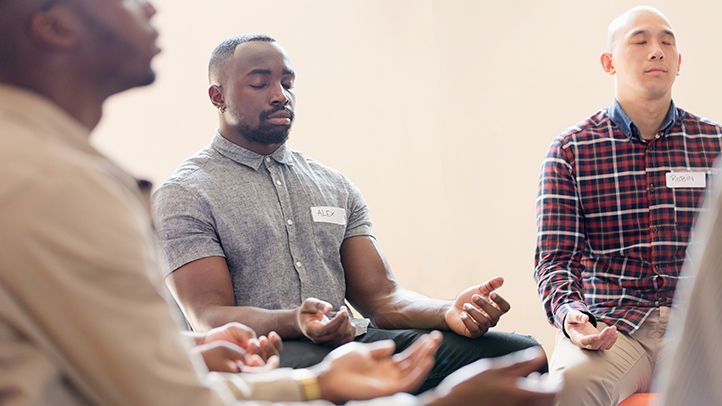 Recent studies are clarifying and refining what works best for reducing the severity of posttraumatic stress symptoms in our Veterans, turning long-held assumptions upside down.

Two recent studies find that general meditation training (ie, practices that do not focus on specific traumas, but instead serve as all-round resilience and self-regulation training) can do a way better job at reducing symptoms than what for years was touted at the V.A. as preferred therapies: Prolonged Exposure Therapy (PE) and Present-Centered Therapy (PCT).

For decades, Prolonged Exposure was declared a treatment of choice for Veterans suffering from military-related traumatic stress. (This technique guides the person to re-experience the traumatic event(s) over and over, until finally, by dint of sheer repetition, the event(s) lose their emotional charge.)  Eventually, PE works, but the dropout rate is high, because the process is triggering and distressing, and a lot of recipients just don’t last long enough to get to the relief part. Instead, dropouts who flee are left more activated and retraumatized than when they started treatment. For this reason, many V.A. clinicians who were encouraged to take the training simply refused to use it. They didn’t have the stomach for it.

A randomized, controlled study at the San Diego V.A. and UCSD, published in Lancet Psychiatry1, compared the non-trauma-focused practice of Transcendental Meditation (TM) with prolonged exposure therapy (PE) and then compared both therapies with a control of PTSD health education (HE).

The study included 203 veterans with a current diagnosis of PTSD resulting from active military service. They were randomly assigned to a TM or PE group, or an active control group of HE. Each treatment provided 12 sessions over 12 weeks, with daily home practice. TM and HE were mainly given in a group setting and PE was given individually.

The primary outcome was change in PTSD symptom severity over 3 months, as assessed by the Clinician-Administered PTSD Scale (CAPS).

The researchers conservatively conclude that non-trauma-focused-therapy, TM, might indeed be a viable option for decreasing the severity of PTSD symptoms in veterans, and cautiously suggest that meditation represents an efficacious alternative for veterans who prefer not to receive or who do not respond to traditional exposure-based treatments of PTSD.

(Ed. Note: This study, in fact, suggests we needn’t start with PE in the first place as the go-to intervention of choice, and instead use a method that showed itself to be more effective and with less downside than PE.)

Another study published in the American Journal of Psychiatry, also out of the San Diego VA and the Boston VA hospitals2, compared Mantra Meditation (another non-trauma focused intervention, where a sacred word or personally meaningful phrase is repeated over and over again) and compared it to Present-Centered Therapy, which is also a non-trauma focused intervention that uses shared discussion of current stressors and coping solutions.

The study was a two-site, blinded-assessment randomized trial involving 173 veterans diagnosed with military-related PTSD from January 2012 to March 2014.

Both treatments were delivered individually in eight weekly 1-hour sessions. The primary outcome measure was change in PTSD symptom severity, as measured by the Clinician-Administered PTSD Scale (CAPS) and by self-report.

Self-reported PTSD symptom severity was also lower in the mantram group compared with the present-centered therapy group at the posttreatment assessment, but there was no difference at the 2-month follow-up.

Significantly more participants in the mantram group (59%) than in the present-centered therapy group (40%) who completed the 2-month follow-up no longer met criteria for PTSD (p<0.04).

Reductions in insomnia were significantly greater for participants in the mantram group at both posttreatment assessment and 2-month follow-up.

The investigators conclude that in a sample of veterans with PTSD, individually delivered mantram repetition therapy was generally more effective than present-centered therapy for reducing PTSD symptom severity and insomnia.

So, there you go. Live and learn. We get better and better at this, as long as we’re willing to keep questioning our closely held biases.

Kudos to the San Diego V.A. for having the courage to question the sacred shibboleths of the research and treatment culture at the time these studies were begun. Clearly they’ve contributed to the new openness in the VA that currently exists, and most importantly, that brings fresh, effective, gentle treatment approaches to our Veterans.