Questioning the Use of the Word “Can” in an Affirmation 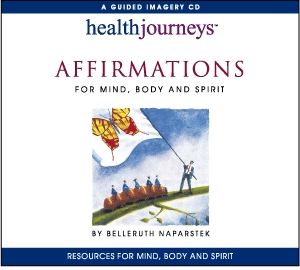 I received your first audio program when I was undergoing chemo for breast cancer. The chemo nurse gave it to me. I loved it, especially the guided imagery part. I also used your surgery tape and I breezed thru the operation. Then I bought other CDs, but found them repetitive and the imagery very similar, no matter what the topic. I myself have been using affirmations and teaching meditation for 30 years.

My understanding about affirmations is that they should be positive, which yours certainly are, and in the present, which yours are. Anyway here is my question. Why do you use the word "can" in your affirmations?

The word "can" to me implies that I am ABLE to do something, but may or may not be doing it NOW. For example "I know that when I CAN forgive myself and others for errors of the past, I give my body peace and comfort."

That says to me that when and if I ever am able to, that, I WILL get the peace and comfort and that may be never. I listen to your tapes while I exercise and I hear you say "can" and then when I repeat it, I change it up to I forgive myself and others for errors of the past...etc. I am just afraid I am giving my subconscious mixed messages. Any reason for the "can" that I am not aware of? Thanks for reading.

Thanks for writing. To answer your first concern, I just want to say that, actually, with a couple of exceptions, the imagery on my 60 plus titles is quite different, once you get past the opening induction.

I wonder if you got the 2 exceptions! The Fight Cancer and the Help with Chemotherapy CDs have some strong similarities; and also, our Relaxation & Wellness imagery is similar to one of the 4 meditations on the Relieve Stress audio program and on the Relaxed & Awake for Medical Procedures CD.

But that's pretty much it. The other programs are quite unique, once you get past the intro and starter inductions, which are pretty much the same.

It's possible that as an experienced imagery user, you listen to the opener and promptly zone out, barely aware of what follows. So maybe you never consciously hear the hefty part that follows, which is quite different? I'm guessing here. This would not impair the effectiveness of the imagery, but it could affect your recall.

As for the use of the word "can" in the affirmations, you raise a very interesting philosophical and technical question, that not only applies to affirmations but to two different schools of guided imagery/hypnosis thought as well.

My experience has been that if the affirmations or the imagery suggestion is too far from people's reality, they might reject it out of hand as ridiculously impossible or unlikely. By inserting "can", you sidestep that potential problem, and make the goal believable and do-able.

Over the years, people have written in to say that these affirmations, phrased in this way, work well for them. (A few have complained that they are a bit long-winded, and I think that is a legitimate complaint. Over the years, we've refined and shortened them.)

This is particularly true, I believe, for the issue of forgiveness, which is the example you happened to use here. Too often people are pushed into forgiving prematurely, before they're ready – either because of religious beliefs or maybe a very strict upbringing that doesn't allow for anger, or perhaps a certain "flight into light" orientation (a new agey, PollyAnna-ish insistence that all is right and well and good (also known as "denial").

I think this can add insult to injury. Not only does the person have to deal with the grievance that made her angry or hurt in the first place; now she has to forgive it.

I don't think that's fair or realistic, and it can lead to emotional inauthenticity (always disempowering), passive aggressive behavior (also disempowering, plus really lousy for relationships) and, ironically, it can make angry people even angrier.

After all, sometimes forgiveness takes years. Sometimes it's not in the cards at all. People have to respect their own readiness and choose for themselves what's right for them at the time that's right for them. Paradoxically, this allows them to achieve forgiveness earlier than they might otherwise have managed.

There's a parallel in different approaches to hypnosis. In traditional hypnosis, you're never supposed to imply the possibility of failure – so the hypnotherapist speaks very affirmatively,'You will do thus-and-so", because that connotes that of course you can and will do it.

The problem with this style, however, is that some hear it as too authoritarian and they get their backs up and resist.... As in, "Dude, who are you to tell me what to do?"

On the other hand, in Ericksonian-style hypnosis, outcomes are suggested in a much more loosey-goosey, strategically confusing way, as in "and perhaps you will do this or perhaps not, but if you do, and you might...."

The assumption here is that the listener's unconscious doesn't distinguish dualities anyway, that the confusion drives a deeper and more effective trance state, and that the person will choose what's right for him or her at the right time. Any resistance to being bossed around is eliminated, right off the bat.

From a personal standpoint, this style suits me better and, in my experience, it works better for most people, certainly in the US with our anti-authoritarian, independent, manifest destiny, cowboy-style culture! (Probably applies very much to Australia, too.)

But you certainly raise an important, interesting and arguable point. Thanks for the opportunity to think about it some more.

Hope this clarifies why the wording is the way it is.