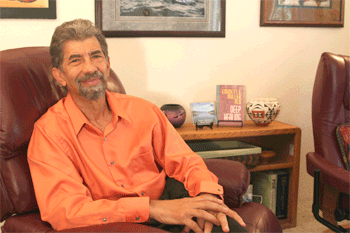 Master hypnotherapist, guided imagery pioneer, math and physics nerd, player of multiple musical instruments, super-athlete, and all-round polymath, Emmett Miller MD, is a man of many parts. A lot of these parts don’t normally coexist within one person.

He’s a guy who grew up in the heart of Bed-Stuy in the 50’s (the Bedford Stuyvesant neighborhood of Brooklyn, known for its rich African American culture, but also for gangs, race riots, and poverty), but he was sent to an all-white high school in Queens for the education. As a result, he got to understand two different universes.

After high school, he became the second black human to attend upscale, WASPY Trinity College in Hartford, CT. Between those 2 institutions, he survived 8 years of social isolation – zero invitations to after-school hanging out, parties, dates or fraternities – with his humanity and equanimity intact.

He’s a gentle, generous, empathic fellow, son of an Episcopal priest father and a devoted mother from a long lineage of physicians, who kept his idealism and compassion alive and well, even after the hardnosed rigors of Albert Einstein College of Medicine.

He’s a rangy athlete with specialties in track, basketball, cross country and football, who hosted a deep-dish IQ and was President of the Physics Honor Society and founder of its Mathematics Society at Trinity.

He’s an expert in deploying the mind to self-heal and de-stress, who came to adulthood in the weed-redolent, LSD laced Haight-Ashbury neighborhood of San Francisco.

He was a peace-loving, anti-war guy with membership in the US Air Force Reserve Officer’s Training Corps Rifle Team.

He’s a guy with the rich baritone voice of an actor, the adeptness with language of a linguistics professor, but the laid back, easy-going, unpretentious ways of the Hippy Dippy Weatherman (George Carlin).

Early on he became fascinated by hypnosis and trained with the brilliant German master innovator, Peter Mutke.

By the mid-eighties, Emmett was creating one brilliant audio cassette after the other, so listeners could experience the healing benefits of hypnosis and imagery for a variety of physical and emotional challenges.

He got started on this so early on, that one person I talked to figured he surely had to be in his late nineties by now. (He’s not even close.)

We’re honored to feature him on our list of authors & carry some of his work, including:

Yeah, so this is a love letter and thank you note to a remarkable colleague. We salute you, Emmett Miller, for all the elements you bring together to help heal suffering in the world and redeem this weary planet!

All best, your fan, speaking for many,